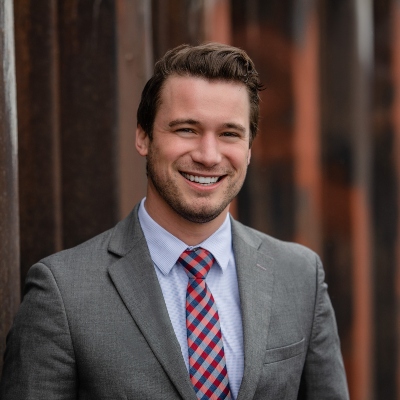 As an attorney at Smith + Malek, Brennan “Boone” Schreibman is a passionate advocate for clients. He focuses on civil litigation and brings particular expertise in appellate practice. A desire to do meaningful, quality work for clients he cares about with colleagues he enjoys is what drew him to Smith + Malek.

For Boone, being an advocate for others is what practicing law is about. A story from a few years ago, when a front desk attendant at Boone’s gym approached him about a legal issue, illustrates his approach. The attendant told Boone how he had incurred a five-figure debt when he was young. He’d been making the monthly payments for over a decade, but he owed even more now because of interest. Boone told him he’d look into it and had him sign a pro bono agreement. Over the next few weeks, Boone and the creditor went back and forth. The creditor ultimately agreed to accept a three-figure lump sum and wipe out the remaining debt. The next time Boone saw the attendant, he told Boone that he could afford to buy a car.

When he’s not advocating on his clients’ behalf, Boone gives back to his community as the Secretary/Treasurer for the City of Spokane Human Rights Commission. He also serves as a Court-Appointed Special Advocate (CASA) for abused and neglected children in dependency proceedings, is a Trustee with the Spokane County Bar Association, Young Lawyers Division, and serves as a Board Member for the Inland Northwest Nature Connection, a non-profit focused on environmental education.

You’ll also find him playing bass guitar in a local band, running, watching the Zags, and attempting to learn to golf. He hopes to one day run a marathon in every state.

What is a quote that captures your approach to your career?

“Do the right thing, in the right way, for the right reasons. And do only that.” – Preet Bharara, from Doing Justice: A Prosecutor’s Thoughts on Crime, Punishment, and the Rule of Law

What are you currently reading?

Caste: The Origins of Our Discontents by Isabel Wilkerson

Whom do you admire most?

Greg Graffin, my dad, Bryan Stevenson (in no particular order).